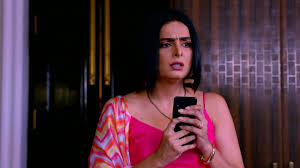 Preeta has Akshay's phone and now she learns about Sherlin's link with him.

Preeta learns that Akshay was blackmailing Sherlin as well and here she gets the recording of Sherlin.

Preeta realise that Sherlin is the real culprit in Akshay's murder case and it is she who has killed him.

Preeta has no proof and here she needs to collect proof regarding the same and out things to end.

Preeta and Sherlin are infront of each other and this time Preeta has only one mission to expose Sherlin.

Preeta wants to expose Sherlin to prove Karan's innocence and end this drama and get him back home.

What more drama and chaos is awaited ahead in the story and will Preeta be able to reach to Sherlin's proof and end the game.