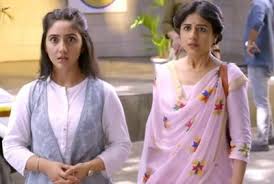 Hanuman's past comes forth Babita is dramatic way and she is shocked to know this.

Babita is shocked that Hanuman has been accused of his wife Imarti's murder and case is being going on against him.

Babita is more confused and shattered that Hanuman never shared this truth with them.

Hanuman's past comes infront of him, Hanuman is back in ex-wife Imarti's memories and speaks badly with Babita.

Minni and Babita stands by Hanuman

Minni is supporting Hanuman in this while Babita is all lost and decides to leave the haveli and tells Hanuman that she can't stay here any more.

Hanuman is fine with it while Minni refuses to go and says that she trust her Hanuman uncle while Hanuman asks Minni to do what her mother wants her to do.