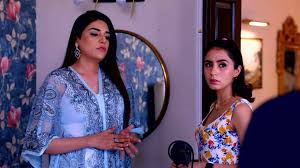 Preeta has found that Sherlin is Akshay's real murderer and now Preeta need to prove it.

Preeta needs proof to expose Sherlin and prove Karan's innocence on court and save him.

Preeta, Sameer and Srishti knows that it isn't going to be that easy to get truth out of Sherlin.

Here Srishti has a plan and she heads to Mahira and reveals to her as how Sherlin and Prithvi are trying to trap her in murder charges.

Mahira is shocked to know it and goes to confront Sherlin over backstabbing her and trying to trap her in Akshay's murder charges.

Srishti, Sameer and Preeta knows that Sherlin will do a mistake or will either confess her crime infront of Mahira and they awaits for the moment.