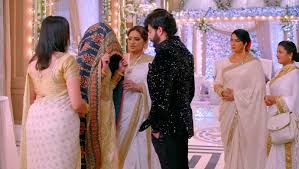 Karan and Preeta's wedding reception is organised while Mahira has played her share of game.

Mahira has made Preeta unconscious and left her to Pawan and instigates him to kidnap Preeta and take her away.

Mahira has veiled herself and stands with Karan in reception party and Karan could sense that Preeta isn't there.

Karan feels restless and also has the feeling that Preeta is in trouble but Mahira plays double game.

Mahira doesn't let Karan go away, here Karan plays a secret move and goes away as he learns that it is Mahira in the veil and freaks out thinking that Preeta is in trouble.

It is Karan's true which makes him realise Preeta's trouble and will he be able to save Preeta.