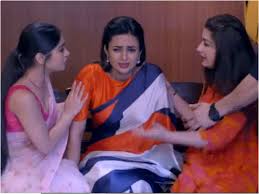 Raman is puzzled over what all is happening to Aliya and Ishita blames Yug for all.

Rohan also raises hand over Yug but here Raman comes to stop all this and tells Ishita and Rohan that Yug will stay in the house.

Ishita stands against Raman and here Raman crosses all limits and puts allegations of Adi's murder over her.

Raman tells Ishita that she hates Yug because he makes her recall the past when she killed Adi.

Ishita is hurt hearing all this from Adi and had never thought that Raman will go upto this limit.