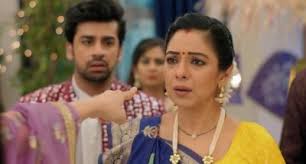 Rakhi says that Shah family needs a daughter-in-law like Anupama who can work in kitchen all day and can be maid to them.

Vanraj loses his cool and bursts at Rakhi and warns her, Vanraj says that he was shut till now as she was his guest.

Vanraj lashes at Rakhi and warns her to dare speak against his wife Anupama, Rakhi drags Kinjal.

Rakhi takes out jewelry and throws it at Anupama, Paritosh goes after them and tries to apologize to Rakhi.

Nandini praises Vanraj's protective avatar for Anupama, Kavya is irked and tells Vanraj that she is leaving.

Anupama tries to talk to Vanraj and says that they must have handled the situation, Vanraj blames Anupama for all this.

Vanraj tells that Rakhi was wrong but all blame is on her because created all this drama, Anupama is in tears.

Anupama tries to talk to Paritosh and Paritosh blames Anupama for breaking his alliance.

» Anupamaa: Paritosh blames Anupama for his alliance being called off