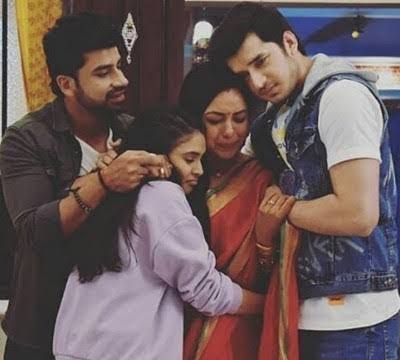 The episode starts with Anupama happy to meet Kinjal and here she makes coffee for Vanraj.

Samar asks Anupama to go outside and talk to Kinjal, Anupama makes coffee and goes outside.

Anupama meets Kinjal and she is also happy to meet Anupama, while Kinjal's mother Rakhi asks about Anupama.

Mama ji tells that Anupama is a teacher and Rakhi asks what has she done, while Baa says she is only 12th pass.

Rakhi is shocked and thinks that her daughter Kinjal's saas can't illiterate, here Kinjal and Paritosh goes to talk.

Kinjal asks Paritosh as why he didn't tell that his mother is not a graduate, while Paritosh tries to flirt.

Rakhi tries to question Anupama while Vanraj and Kavya tries to stop them, Kinjal's family leaves and buys time for engagement.

Anupama is shocked as Paritosh is embarrassed because of her and Pakhi, Vanraj also supports him.

Samar is shocked as he learns that Anupama got fired and here Vanraj asks her to do home job as she can't work.

Anupama speaks against Vanraj and says that motherhood is her right and no one can stop her from taking decision of Paritosh's marriage.