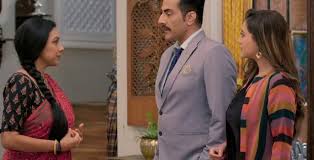 The episode starts with Anupama feeling bad that Paritosh didn't tell her about his love life and Kinjal.

Anupama tells Samar that she would be happy for Paritosh if he had told her, Samar jokes and tries to cheer her up.

Samar cheers up Anupama and says that if he will fall in love then he will tell her first.

Anupama asks if he had gone for movie then Vanraj says yes, Anupama asks with whom and he says with clients.

Anupama recalls as once they had gone for movie and Vanraj tells her that she didn't get time to go with him.

Anupama asks about the movie and Vanraj says that it was an english movie and a sci-fi.

Anupama asks him to tell story later and goes, here next morning Vanraj and Paritosh were doing exercise.

While Paritosh asks Vanraj that he is scared that Kinjal's family is much educated and will not approve them after meeting Anupama.

Vanraj tells Paritosh that Anupama is his mother and nothing can be done while Paritosh asks him to call Kavya she will make an impression.

Vanraj tells Paritosh that it can't happen as Kavya is not part of family and Anupama is his mother.

Here Anupama gets a call of principal Parul who tells her to come to school as it's inspection and about school reputation.

Anupama decides to complete work and go and gets ready on time while here Vanraj talks to his boss and is shocked to know about client meeting.

Vanraj and Kavya comes home and here Vanraj asks Anupama to make Gujrati food for four people as some clients are coming, Anupama is shocked.

Vanraj tells Anupama that his family is her first responsibility and leave the job while Anupama plans to balance out.

Anupamaa: Anupama's big choice amid Vanraj or her career dreams