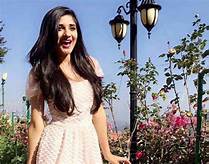 Kanika Mann is an Indian Model and actress who predominantly works in Punjabi music industry.

Kanika Mann was born on 1 August 1994 (24 years) in Panipat, Haryana, India, she has completed LLB from Punjab University, Chandigarh, India.

She started her career as a model and won Miss Continental title in Miss India Elite 2015.

Kanika has also appeared in some of the TV commercials as well, she then started appearing in the music video and her debut song was Roofafza sung by Sharry Mann in 2015.