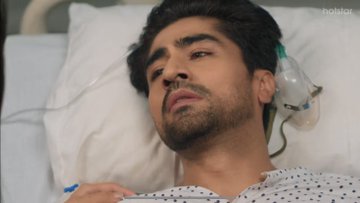 Star Plus's popular hit show Yeh Rishta Kya Kehlata Hai is all set to keep it's audience hooked to their screens with its high voltage drama. The show is gearing up for many twists and turns.

Recently We have seen that Abhimanyu and Akshara search for each other in the Fire after Akshara goes for him.

However Abhimanyu successfully brings unconscious Akshara out but collapses on the floor as the Fire had damaged him bad.

The Story takes an interesting turn when Harsh breaks down seeing his Hospital which was burnt out to which Neil supports him and asks him to be strong.

Abhimanyu comes back to Life

Akshara breaks down for Abhimanyu while Kairav regrets for his behavior towards Abhimanyu to which Manjiri consoles him.

As Abhimanyu gets back to Life after Akshara cries for him, Everyone is elated.

Much to Abhimanyu's shock Abhimanyu notices the growing Relationship and Trust between Harsh and Neil. He feels troubled as he fears the troubles.

YRKKH: Akshara Blamed for mess in the Hospital Abhimanyu tak...

YRKKH: Abhimanyu attends the Emergency Akshara struck with a Stranger

YRKKH: Abhimanyu attends the Emergency Akshara struck with a...

YRKKH: Abhimanyu and Akshara to spend cosy moments in the Party

YRKKH: Abhimanyu and Akshara to spend cosy moments in the Pa...

YRKKH: Aarohi comes to the Party Abhimanyu and Akshara's clo...