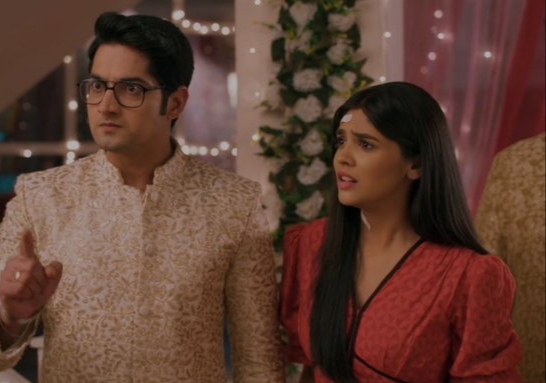 Star Plus's popular show Yeh Rishta Kya Kehlata Hai is all set to keep it's audience hooked to their screens with it's high voltage drama.

Recently We have seen that Abhimanyu gets an emergency call when he was enjoying the Party with Akshara where he decides to resolve his difference with Akshara and Vice versa.

Sanjay has his eyes on her and he decides to meet Akshara at the Hospital after knowing she works at Birlas.

The Story takes an Interesting turn when Sanjay tries to molest Akshara where Abhimanyu comes to her and saves her beating him up.

Sanjay further sets the Hospital on Fire to Avenge Abhimanyu where the North Wing is on Danger. He saves the Patients.

Unfortunately Kairav blames Abhimanyu for the mess when Aarohi provokes him and says he failed to protect her.

Kairav goes berserk and blames Abhimanyu for the same and pulls away Akshara while he stands Lifeless hearing his accusations.

What will Akshara do?

YRKKH: Akshara Blamed for mess in the Hospital Abhimanyu tak...

YRKKH: Abhimanyu attends the Emergency Akshara struck with a Stranger

YRKKH: Abhimanyu attends the Emergency Akshara struck with a...

YRKKH: Abhimanyu and Akshara to spend cosy moments in the Party

YRKKH: Abhimanyu and Akshara to spend cosy moments in the Pa...

YRKKH: Aarohi comes to the Party Abhimanyu and Akshara's clo...

YRKKH: Parth gets a panic attack denies to be the Accountant

YRKKH: Parth gets a panic attack denies to be the Accountant...

YRKKH: Neil accuses Abhimanyu of being Jealous wants to become the CEO

YRKKH: Neil accuses Abhimanyu of being Jealous wants to beco...