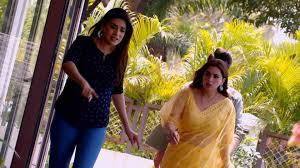 Karan is behind bars and here Preeta is struggling to save him but fails and now she has got Akshay's phone.

Akshay's phone is a great clue for Preeta and they are trying to find his murderer so that Karan's innocence can be proved.

While Sherlin takes disguise of a masked man and comes to steal Akshay's phone.

Preeta and Luthra's are after her and she had a narrow escape from their hands and leaves Preeta broken.

Preeta sheds tears as she fails to free Karan and loses on yet another proof which can help them.

What more drama and dhamaka is awaited as Preeta cries in pain and misses Karan and sleeps on floor thinking that Karan is bearing the same pain in the jail.