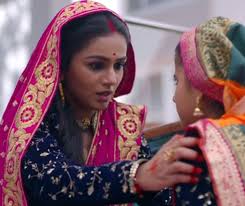 Bondita is still chasing Anirudh by hook or by crook and making her dream possible while she is trying to defeat Manorama at each step.

Bondita learns about Manorama's plan to blast bomb in the viceroy house party.

Bondita fails Manorama's plan and puts her in a fix where she is asked to either choose Anirudh or her mission.

Bondita and Manorama's bitter face off

Bondita asks Manorama to leave Anirudh if she wants her jacket back which has bomb.

Manorama is left in big dilemma as what to do, her mission for freedom is also important.

What more drama and twist is awaited ahead, stay tuned for more exciting updates only on entertainment news website latestgossipwu.com