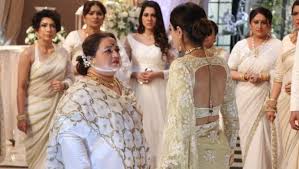 Karan learns that Mahira has replaced Preeta and here he worries for Preeta while Mahira has yet another game to play.

Mahira tries to malign Preeta's image in Luthra mansion and she says that Preeta had runaway with Prithvi.

Mahira shows a fake letter and says that Preeta had left this behind and it has clearly written as how much she hates Karan.

The letter says that she is going away with Prithvi and will not return back, Karan stands shocked.

While Sarla knows her daughter Preeta well and thus slaps Mahira for trying to malign her image and asks where Preeta is.

Sarla warns Karan that Preeta is in some trouble as she can't go away like this.