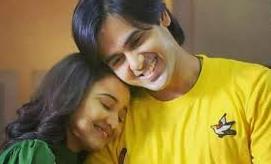 Sameer, Naina are hiding their big truth from all society while are trying their best to keep it to them.

While other society members are also hiding some or the other thing as here Jatin is hiding his smoking habit and Aditya about his drinking.

Vinita who is always suspicious about Sameer and Naina reaches outside the society to find them.

Vinita plans to make it a big dhamaka as she wants to catch Sameer, Naina red handed.

While here she is soon to get a shock, this shock is from her own husband Jatin as she and family members catches him smoking.

Vinita falls in her own trap and gets embarrassed infront of all and Sameer, Naina gets alerted over this fact.