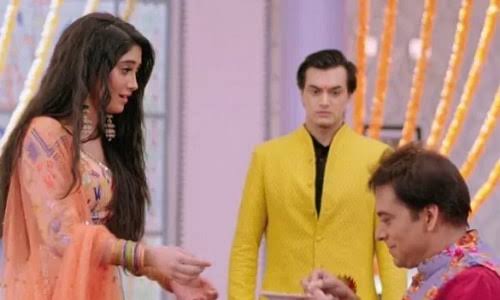 While Naksh tells Naira that let me ask Kartik, Keerti says that she will answer.

Keerti comes forward to defend Kartik and says that Mansi had done mistake but Kartik had suffered for it.

Keerti says that Naira had doubted Kartik that time and was annoyed with him, why can't Kartik's annoyance be justified.

Gayu also comes to support Naira and says that it is wrong of Kartik to blame Naira.

Here Naksh asks what if the accident had happened because of Kartik would he doubt himself.

Naira shouts stop it and leaves, here Naksh goes after her to console her and apologize to her.

Devyani and Dadi also argues as Devyani says that Naira is still treated as an outsider here.

Devyani says she can say the same for Naksh he choose Naira over Keerti anytime.

Keerti and Naksh shares moment of togetherness and apologize, here Naksh tells Keerti that he is upset with her as she didn't got Krish home and Keerti is hiding something and thinks something.

Next morning Naira takes Manish out to play and tells Kartik that he isn't ill to be kept inside, doctor also suggests same to Kartik.

Naira and Manish plays and Kartik looks on, here Manish talks to Keeti on video call and everyone is happy.

» YRKKH: Kaira's greedy move to stay back at Goenka house