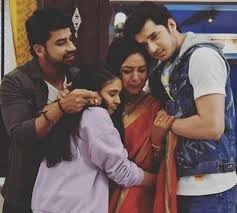 The episode starts with Anupama being insulted by her own family while here she takes stand for herself.

Anupama tells Vanraj that atleast she tried to move ahead and took job although she failed to keep the job going.

Anupama tells Vanraj that she was not doing job for money but to make her children proud.

Anupama bursts at Vanraj and Paritosh and tells Paritosh that she has given 25 years of her life to them.

Anupama narrates as how she got married early and left studies for Paritosh and choose motherhood.

Anupama takes stand for herself

Samar and Mama ji claps for Anupama, later Vanraj bursts at Anupama that as she lost her job she may lose her family.

Vanraj calls Kavya and apologize she gives forgiveness while Vanraj refuses to come to office as it's Rakhshabandhan.

Vanraj's this step hurts Kavya, here Anupama gets happy as Vanraj smiles at her and Baa also prepares for Rakhshabandhan.

Kavya is miffed and decides to make Vanraj feel insecure when he will learn about Anirudh.