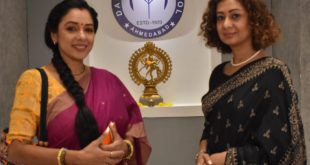 The episode starts with Anupama being excited for her new job and rehearses to introduce herself.

Anupama is happy for her new beginning and here Vanraj comes and she hugs him.

Vanraj warns Anupama that he has allowed her only on a condition that it will not affect his family.

Baa taunts Anupama while Mamaji manages everything, here Samar is excited for his mother.

Anupama talks to Pakhi who is upset over her joining her school, Anupama asks Pakhi to give a chance to her.

Anupama gets late for her first day at job

Anupama later goes to Paritosh who was talking to his girlfriend and later tags Samar as looser.

Anupama gets angry at him, here next day Anupama is getting prepared for first day at job and Samar gets up early to help Anupama.

Anupama makes food while everyone is having breakfast Kavya comes and Vanraj asks her to make maal pua for Kavya.

Anupama is getting late for school but cooks maal pua, here Samar is irked and says that it's Anupama's first day of job.

Anupama wants Vanraj to drop him but couldn't say and here she asks Pakhi to take her with her but she refuses.

Samar taunts Kavya and Vanraj as Kavya asks Anupama to leave for her first day at job and she will serve Vanraj.

Anupama denies and says that only she serves to Vanraj, Kavya says that Anupama has spoiled Vanraj.

Samar taunts Kavya that it's wife's place and not girlfriends, Kavya gets upset.

Anupama rushes and searches for an auto as she is getting late for school and couldn't be late on first day.

Anupama gets late for school and principal Parul scolds her.

Anupamaa: Kavya encourage Anupama to do job via selfish motive