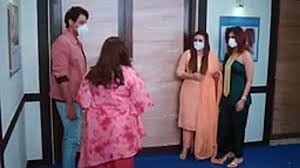 The episode starts with Rohit speaking his heart out to Sonakshi as how much he loves her.

Rohit recalls the moment when he got married to Sonakshi and how they had moments of togetherness.

Simmi asks Rohit as why he had left Sonakshi when he loves her so much.

Rohit says to Simmi that Sonakshi deserves happiness which he can't give her.

Sonakshi is unconscious and here Nishi stops doctor from giving antidote to patient and asks them to wait for some time.

Suman and Sumit meets Sonakshi, Suman tells Sonakshi as how proud she is of her.

Suman asks Sonakshi to return home soon while she says that she can't until Rohit is fine.

Suman narrates all truth about Rohit as how he had helped them and divorced her as per the sacrifice and is in pain.

Nishi breaks the antidote which was about to be given to Rohit and his condition gets critical.

Sonakshi disguise as nurse and slaps Nishi, Nishi asks who is she.