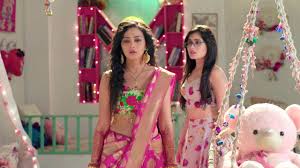 The episode starts with Mishti taking care of Abeer and asks doctor to get Abeer fine.

Doctor gives injection to Abeer and takes his blood for test, Rajvansh and Maheshwari family is waiting for Abeer, Mishti.

Jasmeet talks to Meenakshi against Mishti and Meenakshi says that she is her daughter-in-law now.

Rajshri asks Jasmeet to stop, here Kunal is searching for Abeer at home while Jugnu lies to him.

Mishti and Abeer goes in auto and leaves for temple but Abeer is not in senses.

Mishti and Abeer's gets late for mahashivratri pooja

Abeer and Mishti reaches temple and Mishti takes all blame of being late on herself.

While Meenakshi is not really happy as Abeer couldn't do mahashivratri pooja and Kuhu, Mishti didn't fight.

Meenakshi takes Kuhu aside and sees Mishti, Meenakshi asks Kuhu if Mishti had done all this intentionally and Meenakshi wants Mishti to listen.

Kuhu says that she don't know but Mishti is independent and may be she don't want to do pooja and thus done all this, Mishti doubts Kuhu.

Kuhu and Mishti had fight over spiking Abeer's coffee.

Meenakshi tells Vishambhar that her son Abeer is in danger because of your daughters and why should she keep them at her house.