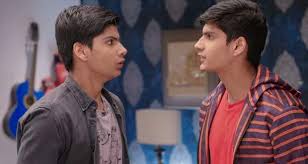 Kartik and Naira rushes to stop Kush from taking this step, here Vansh and Kairav comes but Kartik, Naira distracts them.

Kartik and Naira talks to Kush and manages to save them, Surekha bursts at Naira after this.

Surekha says that Naira should leave Luv, Kush alone and blames Naira for Shubham's death and says that she was after Luv, Kush now.

Naira says that Luv, Kush are wrong and she will not leave them.

Police comes to Goenka house and everyone thinks that Naira has called police but police says that doctor has called him.

Naira and Kartik are stuck in dilemma

Surekha says Trisha has said nothing as she is ill, police goes to meet Trisha.

Nurse calls Naira and thus police goes to talk to Trisha and take her statement, Trisha starts to say something but couldn't say as she sees family's face.

Naira says that Trisha needs not give stress and asks police to talk later, Trisha coughs and doesn't speak anything and police goes.

Naira is missing and Kartik fears as he hears police coming.