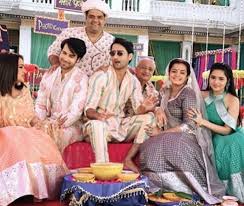 The episode starts with Nanu asking Vishambhar and Maheshwari family to come to the Rajvansh house for fun.

Kunal tries to message Kuhu but she is busy and here Kaushal comes to talk about business while Kunal is talking about Kuhu.

Kunal message Kuhu that she is busy for her husband and Kuhu reply's that who husband.

Abeer and Mishti had their tashan moment and teases each other, Kunal is tensed as tomorrow is their divorce day.

Kunal comes to Meenakshi and she hides some legal papers, Meenakshi asks Kunal to focus on wedding.

Kuhu comes to meet Kunal and here she taunts him, Kunal tries to express his heart to Kuhu but Maheshwari family comes.

Nidhi gets Ketki's letter and here they unveils the surprise and recreates how Abeer and Mishti first met.

Abeer, Mishti, Kuhu, Ketki and Kunal recreates the old memories and the surprise brings happiness for Mishti and family.

Kunal, Kuhu recalls their wedding moments, Abeer thanks Mishti for being in his life.

Nanu gifts ancestral necklace to Mishti and says that it is for best bahu, Kuhu is stunned and shocked.

Everyone plans to click pictures and here Abeer clicks it, while Ketki says that he is important to be present in picture and gives phone to Kuhu.

Kuhu feels bad and Kunal, Abeer notices it while Kuhu feels left out, Mishti, Nanu all prays to God and Mishti sees Meenakshi and asks Nanu if this necklace was given by Meenakshi and Nanu says yes.

Jasmeet speaks against Mishti to Varsha that Kuhu deserves that necklace but Mishti had snatched it.

Mishti goes to talk to Meenakshi, while Meenakshi blesses her and her says that she was right that one day her both sons will be against her and it is true.

Meenakshi tells Mishti that she is going away as it is Abeer's wedding and he wants her to be away.

Kuhu packs her bag and Kunal is shocked, Kuhu shows the date of tomorrow and says that when this wedding is to end tomorrow why not end it today.

Kuhu leaves and Abeer hears all this and asks Kunal that is he really taking divorce.

Kunal is shocked as he loves Kuhu and don't want to part away from Kuhu.