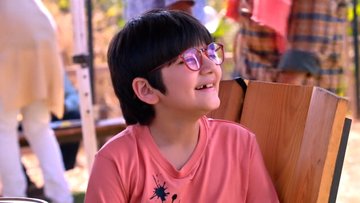 Recently We have seen that Pakhi gets upset as they are Leaving today while Virat decides to have Lunch with her before Leaving.

However Virat and Pakhi gets shocked seeing Sai along with Vinayak and Savi to which Vinayak who sees them gets excited and runs to him.

The Story takes an Interesting turn when Vinayak tells Virat that he has decided to call Sai as his Mother and requests him to let him do so.

Virat and Pakhi gets shocked hearing him to which he requests them again while Virat denies him saying that Pakhi is his only Mother.

In The Upcoming Episodes We Will Get to See that Bhavani says that Vinayak is Adopted hence he is showing his True Colors. Vinayak goes Missing being Hurt with her.

GHKKPM: Sai questions Virat about the reason of his stress

GHKKPM: Sai questions Virat about the reason of his stress ...

Ghum Hai Kisikey Pyar Mein: Sai Turns Vengeful Post Learning the Truth of Vinayak Gets Reminded of the Past

GHKKPM: Virat and Sai get involved to solve a case together again Pakhi fumes

GHKKPM: Virat and Sai get involved to solve a case together ...