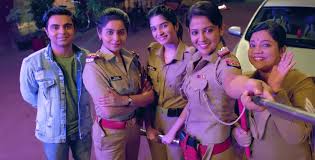 SAB TV is coming up with all new comedy show Madam Sir which is going to be a light hearted comedy.

The show is produced by Jay Mehta and Kinnari Mehta under banner of Jay Productions.

The show is about a Police Station in Lucknow, how the lady police officers and constables handle the case in their own way.

The show has a tagline of Kya Baat Hai Kyunki Jazbaat Hai, here the story revolves around womens.

Madam Sir is taking forward the concept of women power and how women's bravely and emotionally deal with the cases.

The show seems to have fun filled comedy with a message for all.

Stay tuned for more exciting updates only on latestgossipwu.com