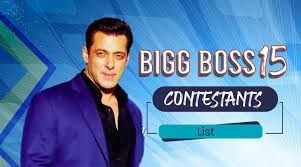 Colors is coming back with its most controversial reality show Bigg Boss with Salman Khan as host.

Salman Khan had been hosting the show and the controversy related to it gets him involved too.

Salman Khan each season says that he won't host the next season but Colors always manages to get him onboard.

This time Salman Khan is again going to be part of Bigg Boss 15, while the speculation are about the contestants of this season.

Bigg Boss 15: Mohsin Khan clarifies about his entry in Bigg ...