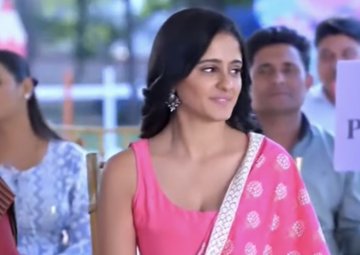 In the Upcoming Track of the hit show Ghum Hai Kisikey Pyaar Main the drama is going to intensify with many interesting twists and turns. The show is gearing up for high voltage drama.

Recently We have seen that Bhavani comes to Virat and Pakhi who were worried discussing about the Letter thrown into their House.

However Bhavani asks them to come to the Function as it is important for them to join them. She drags them both with her.

The Story takes an Interesting turn when Bhavani gives a Speech on Women Rights and tells them as to how important it is. She asks them to Vote for her.

The Women Present there claps for her and says that she is Right. They decide to Vote for her while Bhavani gets Happy with the affect of her Speech.

In The Upcoming Episodes We Will Get To See that Pakhi gets Shot as she threatens Sai and Virat with the Gun. Vinayak Considers Sai the Culprit of his Mumma.

GHKKPM: Pakhi shoots herself in fear of losing Vinayak curse...