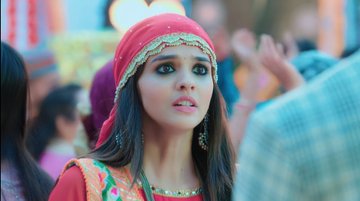 The Drama Yeh Rishta Kya Kehlata Hai is soon going to witness highly intensified Drama and the show is gearing up for many interesting twists and turns. High Voltage Drama is going to Take Place.

Recently We have seen that Shefali fails to find her Make Up kit because of which she gets Restless and starts searching for it.

However she sees that Roohi is Playing with it and snatches it from her. She lashes out at her for taking her Make Up Kit to which Roohi gets Furious.

The Story takes an Interesting turn when Roohi tells Shefali that everyone is being Rude to her after Abhimanyu has left and decides to call him Back.

Aarohi confronts Shefali for shouting at Roohi for just Make Up to which Shefali tells her that Roohi is way too Annoying for her Liking.

In The Upcoming Episodes We Will Get To See that Akshara Misunderstands Abhimanyu's Intentions and Warns him to Stay Away from her. She Hurts his Broken Heart.

The Drama is going to Intensify and We don't want you to Miss It.

Lets see what happens in the Upcoming Track.

YRKKH: Like Mother Like Daughter! Roohi to become the Huge Wall in Between the ReUnion of Abhimanyu and Akshar

YRKKH: Ruhi Complaints to Abhimanyu against Birlas gets Furi...

YRKKH: Akshara Lashes out at Abhimanyu Expresses her Hatred in Speech Abhimanyu Breaks Down

YRKKH: Akshara Lashes out at Abhimanyu Expresses her Hatred ...

YRKKH: Abhimanyu turns Jealous Past Lover Vows to get Akshara Back

YRKKH: Abhimanyu turns Jealous Past Lover Vows to get Akshar...

YRKKH: Abhimanyu decides to Move On from Akshara and not Disturb her Present

YRKKH: Abhimanyu decides to Move On from Akshara and not Dis...

YRKKH: Abhimanyu Decides not to Interfere in Akshara's Matte...

YRKKH: Abhimanyu and Akshara decides to Hide the Past for Forever Abhinav grows Suspicious

YRKKH: Abhimanyu and Akshara decides to Hide the Past for Fo...

YRKKH: Abhimanyu gets Heart Broken hearing Akshara decides to Stay Away for Forever