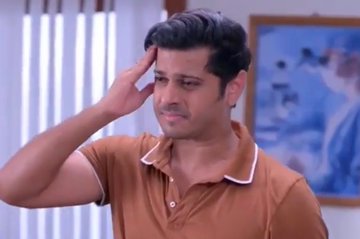 Star Plus's popular show Ghum Hai Kisikey Pyar Mein is all set to keep it's audience hooked to their screens with its high voltage drama. The show is gearing up for many twists and turns.

Recently We have seen that Virat is helpless and he doesn't stop Bhavani from Introducing Pakhi as Geeta who is supposed to be the Surrogate.

The Story takes an interesting turn when Pakhi sees Geeta and gets worried of her Truth coming out. She calls Geeta to a Cabin and requests her to lie.

Sai grows suspicious of Pakhi while Virat asks her not to give soo much importance to her ego while she argues with him.

Much to her shock Sai comes to the cabin and gets shocked finding only Geeta there. She questions Geeta about the Nurse.

While Geeta lies to her that it is not Pakhi. Virat gets furious at Sai for doubting Pakhi and goes berserk with anger which makes her even more furious.

Stay Tuned to Latestgossipwu.com for the Exciting and Fresh Updates of your Favourite Shows.

GHKKPM: Virat opt for Pakhi's CONTENTMENT Sai in for AWFUL A...