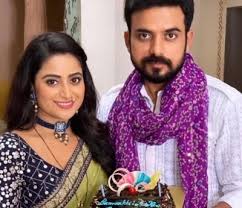 Pakhi had played game of giving second chance to Samrat and her relationship, while she is plotting something else.

Virat and Sai's relationship is also sifgerims because of this and now Pakhi gets irked.

Pakhi is irked as her plan is failing drastically because Virat had taken transfer and going away.

Virat and Samrat's face off

Pakhi can't let this happen as her sole motive is to create chaos and to make Virat jealous of her and Samrat's relationship.

Pakhi will play her masterstroke where she will faint and now begins her pregnancy drama.

This is going to create huge chaos amid Virat and Samrat, Samrat questions Virat over Pakhi's pregnancy which means he is doubting Virat.

Ghum Hai Kisi Ke Pyaar Mein: This Janmastami is going to be ...

GHKKPM: Sai shocked with Pakhi's over the top sweet behavior