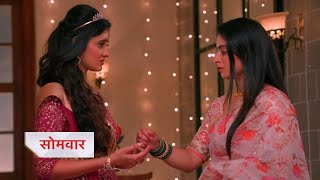 Virat and Sai are trying to make things work and here Virat is hurt as Sai refuses to take the ring otherwise.

Here Pakhi was listening to Virat and Sai's talk where Sai notices her and is left shocked.

Sai is shocked to realise that and here major crisis awaits next, Virat lashes at Pakhi for listening to their personal conversation.

Pakhi taunts Virat and asks Sai to not expect much from Virat as he isn't worth it and changing in a short while.

Sai consoles Pakhi as she can understand that she is hurt as how Virat had forgotten her love and is moving ahead with Sai.

Sai asks Pakhi to not be much worried and consoles her while Virat closes the door at Pakhi's face.