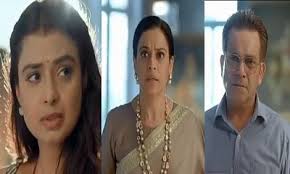 Imlie and Meethi's truth and connection with Dev comes forth Malini and she confronts Dev over it.

Anu is shocked and asks Malini to keep away from Imlie and Meethi, while Malini supports them.

Malini tells Imlie that Dev has betrayed Imlie and Meethi the same way he betrayed them.

Malini thus is in support of Imlie and wants Dev to confront Imlie over it and give her rights of being a daughter.

Dev is scared and feels that Imlie will hate him after knowing it and as he heads to Tripathi house to confront her, he suffers heart attack.

Dev is rushes to hospital and his condition is critical while Malini feels bad that she made her father be in this state.

Imlie: Imlie's (Sumbul Touqueer) way to win back Aparna's he...

Imlie: Aparna assures to kick Imlie out of Aditya's life

Imlie: Aparna assures to kick Imlie (Sumbul Touqueer) out of...