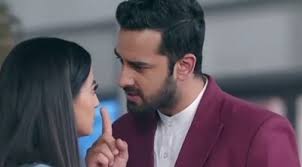 Riddhima is shattered to think that Kabir is now trying to take Vansh's place in business, family and her life.

Kabir takes challenge to make Riddhima say yes to marry him in next 6 hours and it's his mode of revenge.

Kabir and Riddhima's face off

Kabir tells Anupriya that he will make Riddhima go on her knees and marry him and accept his slavery, Anupriya laughs.

Will Kabir be able to do that, what dangerous step will Kabir take here and what more drama and chaos is awaited ahead.