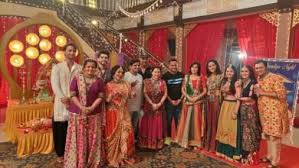 Star Plus popular daily soap Yeh Rishtey Hain Pyaar Ke is gearing up for interesting twist before going off air.

Yeh Rishtey Hain Pyaar Ke is soon to go off air and Saath Nibhaana Saathiya will replace it.

Meenakshi and Abeer's mother and son differences are the highlight of the show.

Abeer had never synched in with Meenakshi's view point and they were always at loggerheads.

Here before the show bids goodbye to the audiences, Meenakshi and Abeer's mother son union will be seen.

Meenakshi and Abeer's face off ends

Meenakshi will risk her life to save Abeer's baby and here Abeer will realise genuine love of Meenakshi.

Abeer forgives Meenakshi and had an emotional union like never before and Meenakshi had learnt her lesson and Rajvansh family will lead a happy family moment.