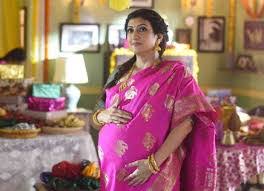 Zee TV is coming up with all new family drama Hamari Wali Good News which is going to go on air from 20th October at 7:30 pm.

The story revolves around the Tiwari family which is a well to do and happy family and this time Renuka gets her son married.

Renuka's son gets married to Navya and there is no trouble in their love, Renuka shares a good bond with daughter-in-law Navya.

Renuka and Navya has more of mother and daughter bonding and now the tragedy strikes when they learns that Navya can't be a mother.