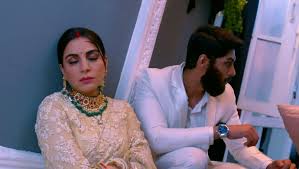 Zee TV's popular daily soap Kundali Bhagya is one of the high on trp show and making its way to the top.

Karan and Preeta's jodi is much loved, while here wedding reception syappa has begun.

Karan and Preeta are at married while Mahira is all determined to ruin their wedding reception.

Pawan has planned to kidnap Preeta and thus get him married to Prithvi and here Mahira will take Preeta's place in Karan's life.

Karan comes to the room to see Preeta and here Pawan hides with Preeta behind the behind and tries to escape.

Preeta is unconscious although tries to call Karan but had a hit and miss with him, will Karan be able to realise that his Preeta is in trouble.