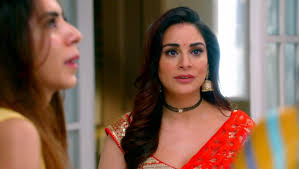 Zee TV's popular daily soap Kundali Bhagya is up for intense drama in twist in the story.

Preeta is now part of Luthra house and claims her as Karan's official wife and degrades Mahira.

Sherlin and Mahira are more irked as Preeta had spilled water over their plan and things are getting worse.

While here Preeta is trying to take over Karan and shares romantic moments with him.

Karan is avoiding her and showing fake anger but they are indeed in love and Mahira, Sherlin fears their union.

Preeta showcase more love to Karan to irritate Mahira and her plan is getting successful.

What more drama and dhamaka are you expecting next, will Preeta get successful in winning Karan's love.

Mahira and Sherlin aren't going to give up so easily and thus they plans something big up next.