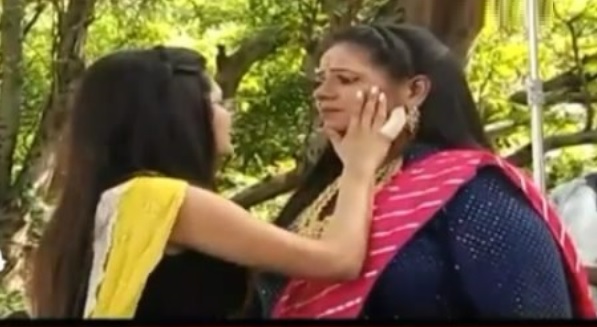 Coming up emotional breakdown between Meenakshi and Mishti in the story of Yeh Rishtey Hain Pyaar Ke will see a major turning point.

Abeer and the families start the ritual of Godhana ceremony but Mishti is missing from the function.

Shockingly, Mishti is here having a deadly fight with the goons while she has strong evidence against Mehul.

Meanwhile, Meenakshi is heartbroken seeing the engagement ceremony rituals as Mehul has convinced Abeer to leave his family after marriage.

Meenakshi feels shattered that she walks away from the ceremony but there she meets Mishti on the way.

Mishti rushes to Meenakshi and reveal everything about her fight with goons and evidence against Mehul.

Meenakshi realizes Mishti’s love for Abeer where she risked her life to get proof against Mehul.

Mishti compels Meenakshi to return back to house and expose Mehul but Meenakshi stops.

Meenakshi wants Mishti to not let Mehul leave the function while she handovers Abeer and family responsibility to Mishti for a time being.

Although Mishti has evidence against Mehul and Meenakshi-Mishti have united hands to expose Mehul, but it’s not the right time for action.

Let see how Meenakshi and Mishti will end Mehul’s chapter.