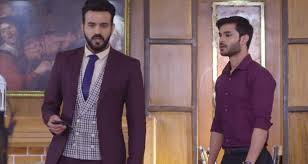 Star Plus popular daily soap Yeh Hai Mohabbatein is gearing up for new twist and drama.

Raman and Ishita heads to Mani's house and here Raman tries to talk to Yug with cool head.

While Yug doesn't seems to be cool head as he bursts at Raman and asks him if he would have done same if Adi was here.

Raman gets agitated with this as he had always considered Yug as his son Adi.

Arjit had filled all this in Yug's mind and Aliya, Ishita are shocked to see their clash.

Aliya and Ishita tries to solve their issues but nothing seems to work and everything is going hay way.