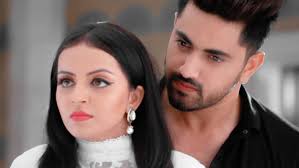 Pooja gets a shock as she returns home, Pooja was crying out her pain of losing her mother infront of Mai.

Pooja gets a call, this call mentions that her mother is kidnapped and is with Kabir.

Kabir blackmails Pooja and puts a shocking condition infront of Pooja to marry him if he wants to save her mother.

Pooja tries her best to find her mother but fails and finally had to give up infront of Kabir.

Pooja agrees to marry Kabir, while is unaware as why Kabir wants to marry her as he knows what she had done to his family and what is her real motive.

Kabir is marrying Pooja for revenge, while will this motive of revenge get successful or will love story will kick start.