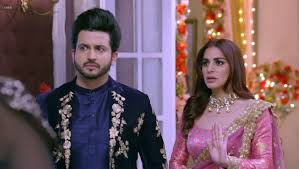 Karan and Preeta are married and it will now show up to them what marriage really means.

Preeta even bursts at Karan for what all happened and how he married her, Preeta even kicks Karan out of his own room.

Sameer makes fun of Karan and tells him that these are side affects of marriage, Rakhi is although happy.

Rakhi always wanted Preeta to be her daughter-in-law and now she is, while its trouble time for Sherlin as she knows that Preeta will not sit silent after this.

While now Karan and Preeta will join hands to work against Sherlin, stay tuned for more exciting updates of the upcoming episodes only on latestgossipwu.com