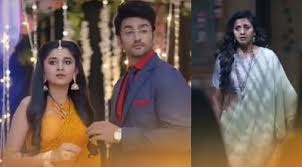 Antara and Akshat's wedding is fixed, here Antara is yet not done after defeating Guddan.

Antara has some other plan where she asks Guddan to marry an old man if she wants to save Akshat's life.

Guddan agrees but Guddan is not an abla naari who is going to take up anything and she very well knows as how to handle evil Antara.

Guddan gets this as an opportunity and gets ready as bride and not to marry that old man but only to marry Akshat.

Guddan will plan bride swap and create big dhamaka and will marry Akshat infront of Antara.

» GTNHP: Guddan to get married in same mandap as Akshat Antara