GTNHP: Guddan to get married in same mandap as Akshat Antara 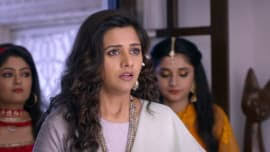 Guddan's all attempts to expose Antara and her truth fails drastically, Akshat and Antara's wedding is announced.

Akshat shows his anger and hatred towards Guddan as planned by Antara, while Antara is yet not done.

Guddan to get remarried

Antara has a plan as she brings an old man and puts a condition infront of Guddan to marry that old man.

Guddan is shocked, Antara threatens to kill Akshat after marriage as she is only after his money.

Antara tells Guddan that if she will marry that man then she will leave Akshat, will Guddan amrry that old man in same mandap as Akshat and Antara.