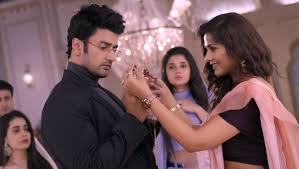 Guddan knows Antara’s truth and she very well knows that she is not pregnant and is lying about it.

Guddan is taking all pain to get the truth out but fails and this time she gets Antara’s pregnancy report and is all set to expose her.

Guddan wants to show the reports to Dadi, Antara tries to stop Guddan and amid this chaos she falls off from the stairs.

Antara has fallen intentionally to make family against her, here Guddan now shows reports to Dadi but she slaps Guddan.

Antara has already swapped the reports and now she plays her game against Guddan.

Guddan gets lashed out by Ddai and Akshat also bursts at Guddan and tellsher that he had not thought that she can stop so low.